Here's the same frame, but accidentally uploaded as black and white film:

The result looks like a sepia-toned print. I suppose this is all doable with in Photoshop but I don't mess with PS so this looked like a quickie way to achieve this same effect...
Posted by ms. rosa at 6:46 PM 1 comment:

Films photographers would love: The Beaches of Agnes Varda

Agnes Varda, who has the distinction of being the "grandmother of French New Wave"* made a documentary (sort of) looking back on her life. In the film, she speaks directly to you about memories of her childhood in WWII occupied France, her loves, her amazing Paris home, film making, her art installations, and her neighbors and friends and especially her family. She's doe-eyed through it all, taking an equal interest in mundane things that have inspired her (the flea market scenes make me want to get a passport immediately) to the monumental things that have not (a trip to her childhood home). At 81, Agnes Varda is that kooky and brilliant, yet calming friend that you want to have brunch with at least once a month. I saw it yesterday at the Angelika. You should check out the film, too...anyhow...

The trailer captures the wackiness about the film accurately, but don't let it be off-putting, this feature most definitely has meat on its bones.

I took interest in the fact that she started out as a portrait photographer. Her photographs are threaded throughout the film, punctuating her decades old love affair with documenting people and places, continuing to this day.

On photography she noted that once she 'let go of the oppression of being in-focus' (I'm paraphrasing, but it's close) she felt free to be more expressive in her photographs. I particulary connect with her love of the blurry foreground. Makes my heart pound just thinking about Varda talk about composition and process.

* She told the tale of her traipse with French New Wave like this: 'Breathless' came out and was a huge success. The production company asked Godard if he new of anyone who could make an urban black and white film cheaply and quickly (to capitalize on the popularity of Godard's style) and he passed along the name of his good friend Agnes. Agnes Varda made her second feature film, 'Cleo de 5 a 7', in response and it garnered a nomination for a Palm D'or at the Cannes Film Festival 1962. Pas mal!

Celluloid geeks converge! Friday, Saturday, and Sunday showings this weekend at the MFA.

"Paul H-O became a fixture of the 1990s New York art scene with his public access show GalleryBeat. Among his fans was Cindy Sherman, the internationally regarded, press-shy artist, who invited Paul for a series of exclusive interviews. Filmed over 15 years and including interviews with artists and entertainers, the documentary paints a picture of the New York art scene that is also an illuminating look at celebrity, male anxiety, and art. Among the latter was Cindy Sherman..."

***BREAKING NEWS: FRIDAY NIGHT'S SHOWING WAS CANCELLED AND MOVED TO SATURDAY THE 5TH AT 11AM. THE SUNDAY SHOWING HAS DISAPPEARED OFF THE SITE. BOO! HISS!***
Posted by ms. rosa at 3:53 PM No comments:

LLU catalog is updated with a class I'll start offering in January. It's called "Developing Black & White Film in Your Kitchen Sink" and I plan on making it shooper dooper fun (it's a gift). SOOOO, if you know of anyone who might benefit from this class (or one like it) tap me electronically on the shoulder and I'll be happy yap with you about it! Also, if you have a group of five or more who might like to take a similar class, let's talk!
Posted by ms. rosa at 11:32 AM 3 comments:

From the Houston Chronicle on-line:

"Dowdy said there were reports that the man and a news photographer exchanged gunfire. " 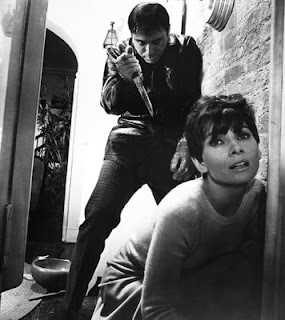 I rented another childhood favorite for me and my little one today. 'Wait Until Dark' stars Audry Hepburn as the blind photographer's wife who is being stalked by a trio of bad dudes lead by the eee-vil, Jack-Kerouac-sound-alike Mr. Roat (played by Alan Arkin who would later play John Cusack's hilariously nervous - and scene stealing - psychiatrist in Grosse Pointe Blank).

Most of the film takes place in a basement apartment - a perfect place for a darkroom studio. The darkroom itself isn't enclosed, it's just in the middle of the apartment, away from the windows. The windows in the kitchen are light-proofed with metal crank shades. During one point Susy (Hepburn) helps her husband by passing fiber paper from the stop bath through the hypo stage WITH HER BARE HANDS!! (at 8:12 above) Later, she'd outwit her adversary by replacing the flower vase water with a photo chemical. I have to admit, I thought the script should have placed fixer...or better yet! selium toner in the vase. (Take THAT bad guy!) But alas, she temporarily blinds Dr. Evil with hypoclear (slight stinging sensation, at 7:24 below).

I had forgotten about the Henry Mancini soundtrack. Groovy. And about her amazing fall coat collection. And about the child in the film. Gloria is a highlight of the film. My kid especially liked her spunk.
Posted by ms. rosa at 7:58 PM No comments:

Well...at least mine can!

Since I don't think his little hands are quite ready to feed film onto a plastic reel in the confines of a black bag, I did that part for him. But come to think of it, I'll sacrifice some expired film this weekend just so he can practice.

For this first venture into the world of processing, my kid poured the chemicals in and out of the tank, and kept hawk-like eyes on the stopwatch. We used Diafine since temperature and precision timing aren't critical to this cheap two-part developer, plus we can skip the Stop bath step. He was so elated to see the film be pulled off the reels. "Just like Christmas" I told him.

For next time I'll probably get some rubber gloves since the use of Fixer made me a little nervous. Academic principals reinforced: Focus, counting backwards, following directions, manipulatives. All great practice particularly if your child is ADD/ADHD.
Posted by ms. rosa at 1:04 PM 1 comment: