I originally wrote this in August of 2006. Thought I would re-print it here, as a way of saying Happy Mothers Day. The photo-essay's original title was "Just Add Water":

Given my avoidance of all things "geared towards kids" it's no wonder that my idea of a fun day with my kid is one that involves long periods of time where we can laze around and shoot the breeze, undistracted by long lines, entrance fees, whirlwind itineraries, closing times, and just generally people telling us what to do and how to do it. yeah. That kinda shit cramps our style. 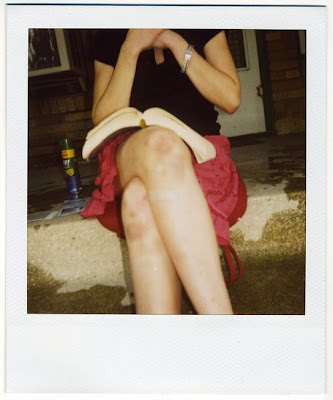 My kid is amazingly similar in temperament to me (and I'll describe myself by how my dad describes me): romantic and macho. now "romantic" in spanish (that would be - you got it - romantico) has another meaning other than the Hallmark Greeting Card meaning that we all know. 'Romantico' can also mean someone who is is very, very sensitive but also given to tempestuous behavior. My kid to a tee. I'm trying hard to not let him be macho but i got a little hint of it from him tonight. Again, my dad isn't referring to my machismo in the conventional chauvinist sense. Rather he calls me "macha" because when I'm in physical or emotional pain I have a tendency to grin and bear it. The mexican equivalent of stoicism, i guess.

In any case, last Saturday and Sunday and today Orion and I spent hours outside on the side driveway, under the pecan trees, barefoot and playing with the water hose. Well, playing with the hose was mostly Orion. I was mostly reading and snapping an occasional picture.

Orion was a trooper and "mowed the lawn" with his lawnmower. His lawn mower emits a little cloud of bubbles when he goes just the right speed. I devoured a Cometbus and when we were good and ready, we took off our shoes and turned on the hose.

Sounds ridiculous but it was so nice out. As long as we stayed in the shade and kept our feet wet, it was downright tolerable. Of course it helped that both days last weekend we were visited by our friend the raspa cart vendor.

Real conversation, in Spanish of course:
vendor: Does he speak Spanish?
me: A little. But he understands it very well.
vendor: Is he your grandchild?
me: no. He's my son.
vendor: Oh!
vendor, recovering: Do you have other children?
me, choosing the easy answer: No, just one.
vendor: Oh!

Ha! I could tell by his accent that my vendor is a relatively recent immigrant. His accent still had that pa-rum-pum-pum that native speakers lose after absorb the huge mixture of accents here in the states. Mexico's social norms specify that a woman of my stature (a homeowner) and social status (married) and of course age should have grandchildren (do the math. it is absolutely biologically possible.) It only follows that this traditional Mexican dude would think i would either be babysitting my grandson OR that Orion is the youngest of 10 children. He was just trying to let me save face with his follow up question. No dice, mano.

For three dollars and fifty cents we got a lime flavored raspa (for the life of me i can't remember the name of raspas in english), a quart size bag of chilled jicama, cantaloupe, and cucumber slices, and a big bag of wagon-wheel shaped potato flour fritters.

Man, there is just something about the smell of wet pavement. And saw dust. And corn masa dough that sends me hurling backwards in time to that bewildering/exhilarating place that is early childhood in Texas and Mexico.

I hope you meant it last Sunday when you said "Mama, this is the best day ever."